If your looking for an easy and inexpensive dinner tonight, look no further. Try this recipe tonight. While creating this butter chicken recipe I wanted something that was easy, inexpensive and of course tasty.

I choose chicken thighs as you can get them at a great price. The other two ingredients are just butter and cinnamon.  To start, you melt the butter with the cinnamon. Then add the chicken. Lastly, cook it.

There is more to it than that. Yet, you get the idea of how simple it is.

Cinnamon is loaded with antioxidants (1). Most importantly, antioxidants protect you from oxidative damage. There was a study done with 26 spices including cinnamon that looked at antioxidants. In the study, cinnamon was the winner of antioxidant activity. It even outperformed such ‘superfoods’ as garlic and oregano.

The keto diet is already a low inflammatory way of eating. Move over, cinnamon also has anti-inflammatory effects for your body. This spice may also help with the sensitivity of the hormone insulin. Cinnamon can also help with bad breath.

To learn more about the evidence-based benefits of cinnamon, click on the (1) link at the start of the cinnamon facts.

We have been taught that saturated fats are bad for you. Yet, this was never really proven. Studies now show there is no association between saturated fats and cardiovascular disease (1, 2).

In addition, butter leads to more fat burning and feeling full. This happens due to butter’s short and medium fat chains. This happens because these fats are metabolized differently from other fats (5, 6).

Notes about the Recipe

Your fat grams may be different for what you actually eat.  This is the case because some butter will be left in the pan.

For this recipe, a cast iron skillet will work great. As an added bonus, it’s an easy clean-up! 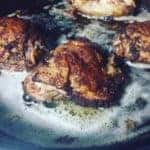